Saturday July 31, 2021 - 19:55:34
Latest News
0 Comments
834
Super Admin
A Somali football player, Hanad Hassan Yusuf, has died of his wounds sustained in a blast that hit JCCI football club's bus in southern Somalia on Friday.
Somali Football Federation, confirmed that the player died at a hospital in Kismayo over night on Saturday. His death brings the total of fatalities from Friday's bomb attack on JCCI FC's bus to three including the team's driver.
Footballer, Abdi Fitah Hassan Abdulllahi, and the team's bus driver died on the spot on friday afternoon when an explosive device planted in thier vehicle went off, as the team was on its way to Waamo football stadium in the southern port city of Kismaayo.

Two players; Mohamed Amin Abdi Mohamed and Osman Hassan Osman, who were seriously wounded in the blast have today been flown to Mogadishu where they have been admitted to Erdogan hospital in the capital.
Somali football federation president, Abdiqani Said Arab,  who was in Kismaayo on Friday at the time of the attack escorted the players to Mogadishu on Saturday.
"The two players are now receiving medical care at Erdogan hospital in Mogadishu" SFF president' Abdiqani Said Arab, told the media at Erdogan Hospital as the two wounded players were being admitted to the hospital on Saturday afternoon.
"We have brought the two wounded players here at Erdogan hospital today. The SFF is responsible for all the care and the treatment they need. I wish them a speedy recovery" president Abdiqani Said Arab told reporters.
"I am very sorry that such atrocities happened to our players. My thoughts are with the family and relatives of the slain players. This is unacceptable" the president noted. 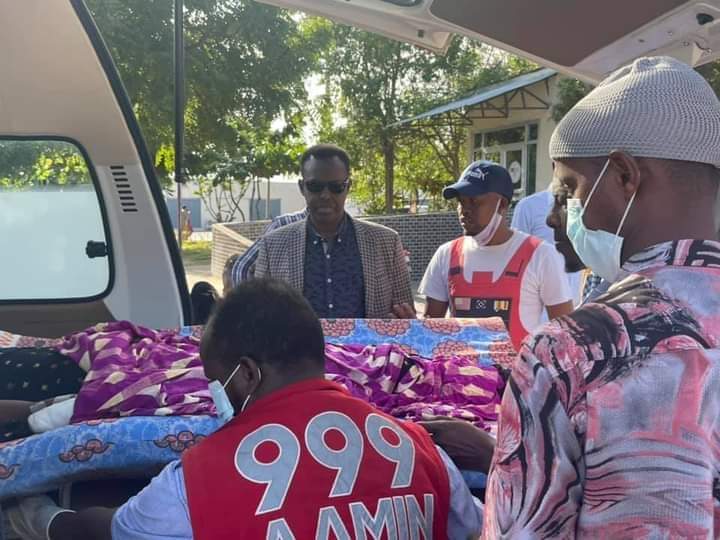