Saturday September 12, 2015 - 11:39:58
Achievements
0 Comments
2105
Super Admin
After the long struggle by Somali Football Federation to get Stadium Mogadishu back into its hands, the president of the federal republic of Somalia, professor Hassan Sheik Mohamud, has now announced that AU troops will vacate the national facility, although he didn't mention which date.

Addressing the nation on Friday evening, the Somali president, professor Hassan Sheik Mohamud, made the announcement which grabbed much welcome and appreciation from Somali Football Federation [SFF] whose president has long been trying to get the facility back into the hands of SFF for its proper use.

"The Somali government and the African Union Peace keeping Mission in Somalia [AMISOM], have agreed that the AU troops must leave from Stadium Mogadishu. The troops will soon leave it” the president of the federal republic of Somalia, professor Hassan Sheik Mohamud, said in his address on Friday evening.

The football-loving president of Somalia last visited Stadium Banadir on 15th of May and watched a football match there. During his stay at the Stadium, Somali FA president, Abdiqani Said Arab, renewed his request and demanded the Nation’s leader to push for the withdrawals of AU forces from the facility.

"Hopes are now arising as our president of the republic of Somalia finally made the announcement that AU troops will soon leave the stadium. We are really very much pleased to hear that and on behalf of Somali football family, I comment our president for his commitment to football” Somali FA president, Abdiqani Said Arab, said in a press statement on Saturday.

SFF president also lauded for the efforts made by the minister for youth and Sport Mr. Mohamed Abdullahi Hassan who spent much time and energy trying to get the stadium back into the hands of the people.

Since 2012, the Somali FA officials made several calls for troop withdrawals from the Stadium, but AU troops were still reluctant to vacate it. Earlier, Somali FA president Abdiqani Said Arab met with AMISOM commander at Stadium Mogadishu Captain Angua who said his troops may leave the stadium once the Somali governments asked them.

Built by Chinese government for Somalia in 1978, Stadium Mogadishu changed hands several times since the country fell into anarchy in 1991. In 1993, the facility was used by American forces in Somalia and then the Pakistani troops.

After the United Nations withdrew from Somalia in 1995, the Stadium was back into the hands of Somali FA. But between 2007-2009 it was housing Ethiopian troops who came to help Somali government defeat the once powerful Islamic courts Union.

By the end of January 2009, it fell into the hands of Al Shabab militants who occupied it until after they fled from the capital on August 6 2011. From that date up to the present time the stadium has been used by AMISOM troops. 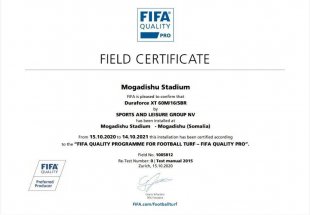